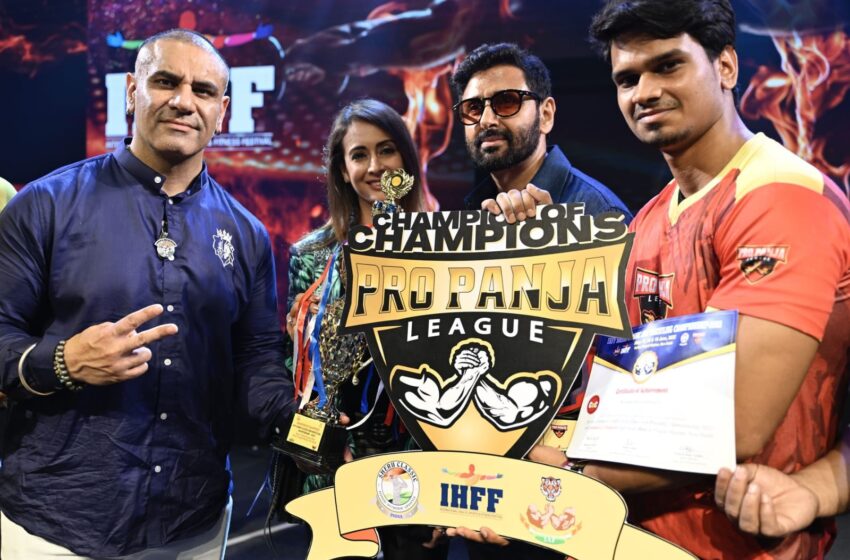 Akash Kumar emerged as the biggest star at the two-day IHFF Sheru Classic Pro Panja League in New Delhi on 18-19 June 2022. The athlete from Uttar Pradesh bagged Gold in the 70 kg category and was crowned the Champion of Champions in the tournament held with over 150 participants across 10 categories in Pragati Maidan in the national capital.

Akash, who defeated Ravinder Singh in a hard-fought Champion of Champions bout at a stadium packed with thousands of Pro Panja fans, expressed his excitement about winning the esteemed title at the IHFF Sheru Classic Pro Panja League, which was hosted in association with the Indian Arm Wrestling Federation,

“This is my third consecutive victory at the IHFF Sheru Classic in my weight division. But I never expected to win Champion of Champions in a competition, which had top-tier players, who were much more experienced and stronger than me. I still don’t know how I managed to clinch the biggest arm-wrestling title in India. I can’t thank the Pro Panja League enough for providing such a massive platform for all athletes. A big thank you to Parvin Dabas sir and Preeti Jhangiani Ma’am.”

“Pro Panja has been associated with IHFF and Sheru Classic for the last two years and IHFF Sheru Classic Pro Panja League is a huge platform and has been a great benefit for the players. The tournament has seen a rise in the number of participants from 30-40 to 150-200 athletes. This has been fantastic. The standard of the game is rising really high and we witnessed quite a few surprises in some of the matches. This is great for competition in arm-wrestling because the players know that they have to keep pushing hard. It was also great for Pro Panja to be seen by thousands of people at this event. We want to congratulate and thank everyone for a great experience at the IHFF Sheru Classic Pro Panja League.”

Preeti Jhangiani, owner of Pro Panja League, also spoke about her experience at the competition,

“It was a fantastic experience for the Pro Panja League to collaborate with IHFF and Sheru Classic for the second time in a row. They have a fabulous stage for all their athletes and it was a great experience for our Pro Panja athletes to be on their stage with an amazing audience looking on and the fantastic atmosphere that they created. I congratulate the Champion of Champions for carrying out a fantastic bout. The talent and the competition among the players is growing and we hope to take this League internationally.”

No comments to show.

Ash and Siraj will be excited about
February 7, 2023

Straight to Your Inbox​

Receive All The News And Upcoming Events & News Updates Straight To Your Inbox.